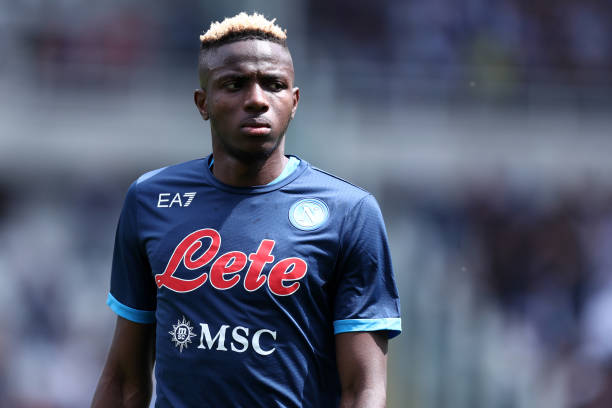 West London giants Chelsea are on the trail of Napoli striker Victor Osimhen who has been constantly labelledDidier Drogba 2.0. This is according to the report from the Daily Mail which stated that the Super Eagles of Nigeria striker is on a five-man striker shortlist with the Blues planning for life after RomeluLukaku.

Lukaku, 29, is on the verge of returning to Inter Milan on loan after just a season at Stamford Bridge. West London giants Chelsea paid £97.5m to secure his transfer from Italian Serie A side Inter Milan for his second spell at the club, but things have not worked out for him as he envisaged. Chelsea and Inter Milan have agreed a loan deal for Lukaku and he’s set to return to the San Siro. Inter Milan will pay  €8m plus add-ons for the loan, but there’s no option to make the deal a permanent one.

The Daily Mail reported that Victor Osimhen is a transfer target and it would take at least €100m (£86m) to secure his transfer from Napoli as revealed by Italian publication Gazzettadello Sport. Apart from Osimhen, Bayern Munich talisman Robert Lewandowski, Sassuolo attacker GianlucaScamacca, Lille star Jonathan David and Everton forward Richarlison are also on the Chelsea shortlist.

Chelsea target Osimhen is one of the best young strikers in European football and he has drawn comparison with Didier Drogba on multiple occasions. The 23-year-old Nigerian striker has scored 28 goals in 62 appearances for his Italian team. He joined Napoli from Lille two years ago. Apart from Chelsea, he has been linked with London rivals Arsenal as well.

Two years ago, Osimhen talked about watching Drogba while growing up and that the Ivorian football icon is his favourite player. He has a lot of similarities with the Chelsea legend including sheer pace, power and aerial presence.